Meet Eric Grims. Eric Grims is a currently a Production Coordinator for The Clarice Smith Performing Arts Center at the University of Maryland. He was previously is a Project Manager and Account Executive at eventEQ, where he oversaw design and implementation of event production for corporate events, concerts, private parties and political events. He has produced events for clients such as the 2012 Presidential Campaign, White House Communications, National Network to End Domestic Violence, University of Maryland, Center for Democracy and Technology, and the National Museum of American History. Since 1999, he has also been Scenic + Lighting Designer for the Rorschach Theatre. He was previously an Artist in Residence at American University. 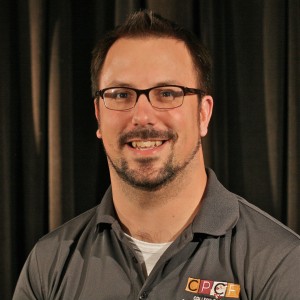 Who was your childhood hero? I had two actually, one fictional, one real. The first was Howard Frank Mosher, my neighbor. He and his wife Phillis watched me during the day when I was too young for school. Howard is a fantastic author of multiple novels and I thought it would be so cool to “not have to work and be able to stay home all day” like Howard. That, of course, was not what Howard did, but at 5 it seemed reasonable and, more or less, still sums up my career goals. My second childhood hero was James Bond (Connery, not Moore). Dress like that, get the cool gadgets, the strong, smart, good looking ladies, and travel the world. Again, not so far from my current life goals.
When did you move to College Park and why?  Tricia [Homer, CPCF’s Board Chair and my wife] and I moved here in the summer of 2012 from DC. She had been working at the University for about 6 month at that point, and I was working in Columbia. College Park seemed like a great spot and an easier commute for both of us and it was close enough to get into the city, but definitely outside it. We had to push our realtor to pull houses in College Park and Tricia actually found the house and then reached out to our realtor. It worked out in the end. This was the first time either of us had lived in Maryland and we’re glad we made the jump.
What is your advice for someone looking for ways to be involved in their community? Reach out. Make the first move. There are always organizations looking for volunteer help, and a lot of them don’t necessarily have the capacity to recruit volunteers. If there is something you are passionate about you can almost always find an organization to match. And if you don’t know where to look, reach out to your local council member, mayor, or city officials. It might take some work, but it will be worth it and appreciated in the end.